Anton De Pasquale talks team-mate contact and his podium for the Shell V-Power Racing Team at the Penrite Oil Sandown SuperSprint in his latest The Distiller column, exclusive to Speedcafe.com.

It was great rocking up to Sandown after such a big week of news at the Shell V-Power Racing Team. There were certainly lots of eyes on us, but the guys and girls stayed focussed and everyone performed at their best, just like every other weekend.

The sun was out most of the time, but there was still a heap of mud around the grounds. It was mostly on the back-side of all the kerbs, and when cars went off, the grass was damp so you just aquaplaned.

It could have been a lot worse with more rain!

We did a decent job in qualifying on Saturday in fourth and the race was pretty smooth sailing. We put an undercut on Will Brown and that sort of worked for us – I vaulted him to a podium position.

It would have been nice to get a few more laps before the others covered us, because I was trucking on real well, but happy to get ahead of him there, so big shoutout to the team, they made that one happen.

Stoked to get a podium and to have both Shell V-Power Racing Team cars on the podium at any time is great. Will was on the top step, so a double podium with one of us winning is even better.

We’re always happy for each other when we go well. 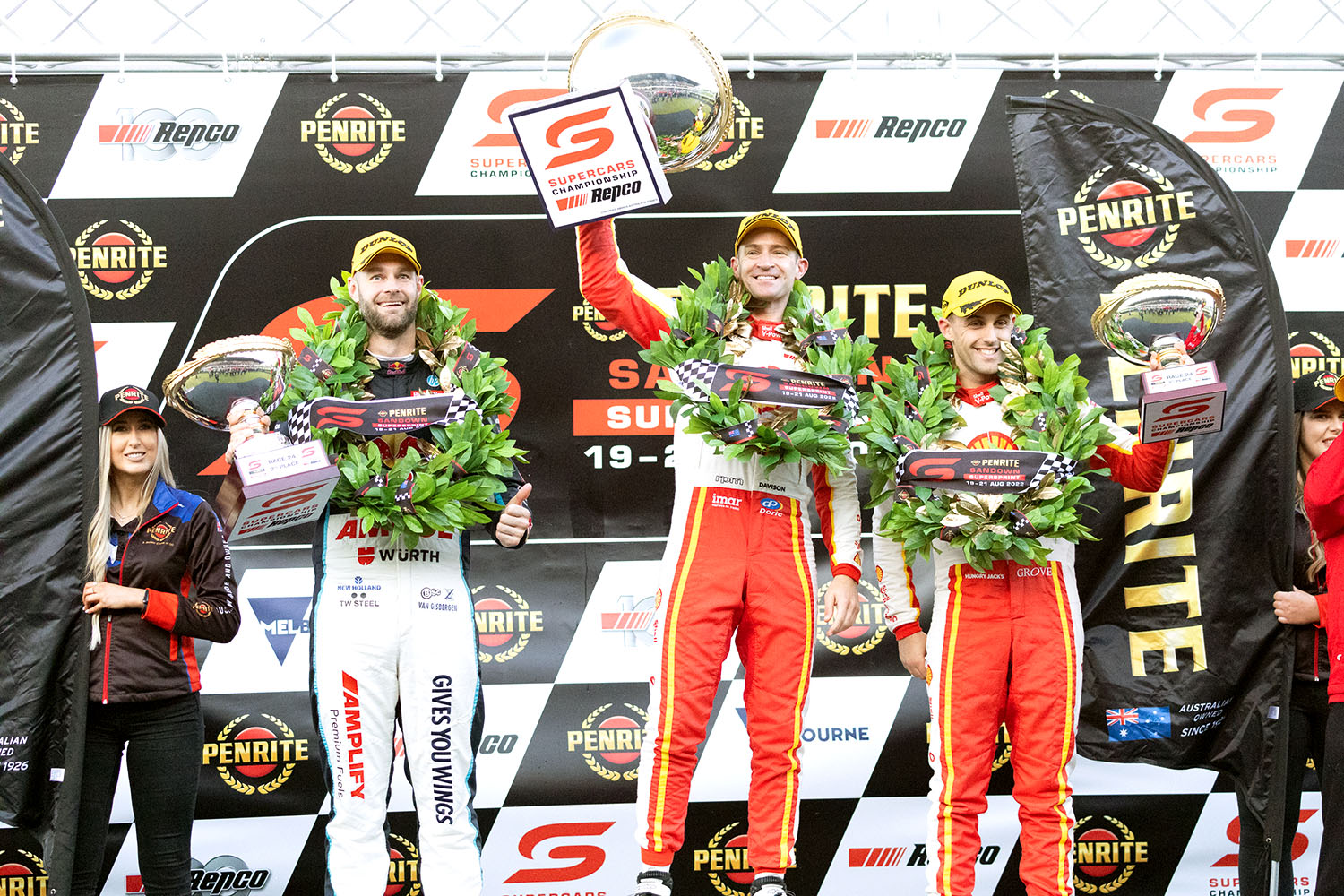 Qualifying for Sunday’s first race was a bit of a shocker, not much more to say there. So we were definitely on the back-foot for track position in Race 25.

I started 13th and had a load of positions to make up. Got to about 11th and then we decided to try the undercut again and that worked quite well for us.

It all depends on who is in front of you, if cars are coming out of the pits, and if the cars in front pit early as well to cover. Whether that kind of strategy works is very circumstantial.

It was a bit warmer on Sunday so that played a bit of a difference in tire life and things like that. But we made a few spots and got to eighth.

Race 26 rounded out the weekend; had a much better grid slot of third, but from the second the lights went out it didn’t go well.

Chaz Mostert was on my heels big time heading into Turn 1 and I managed to defend and keep him behind. It was eyes up from there. 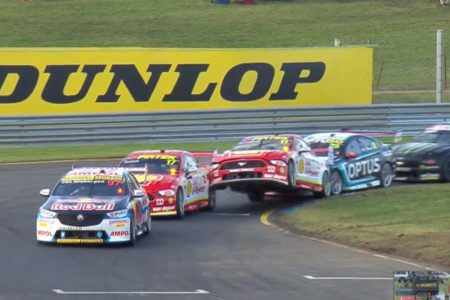 The moment between the DJR cars. Picture: Fox Sports

Shane and Will were battling hard on Lap 2 down the back straight and into the esses, so I made up a bit of time on them. They bottled themselves up at the last corner and all of a sudden my front wheels were in the air.

It was pretty wild, it’s hard to actually know what happened because there was no real contact, just sort of connected wheels and just lifted off.

Rounded the curb on the inside and I saw what was happening. You couldn’t really get off because you’ve got cars behind. You’re a passenger from that point.

Once I landed, the wheels were pointing in all different directions. It obviously bent something quite aggressively in the front-right in that motion and as you come down and hit the deck that’s never good either.

The steering wheel was pretty hard right. So just continued on to the pit lane – that’s where the car sort of wanted to go anyway.

You can’t fix something like that in a few laps. But the car was still quite pacey when we went back out even though it was a bit funky. That race just wasn’t meant to be.

The SuperSprint format was quick-fire but definitely missed the feel of the Sandown 500 like a lot of people were saying over the weekend.

We kind of got half a tease with the co-drivers doing their practice session on Friday, and then usually that leads into a qualifying session which then leads into the co-driver race. I’ve done a couple here – I think they’re really cool races.

The Sandown 500 is iconic and I quite enjoy that style of racing. I think it would be nice to have it back.

Keen to get to Auckland in a few weeks and race at Pukekohe one last time. 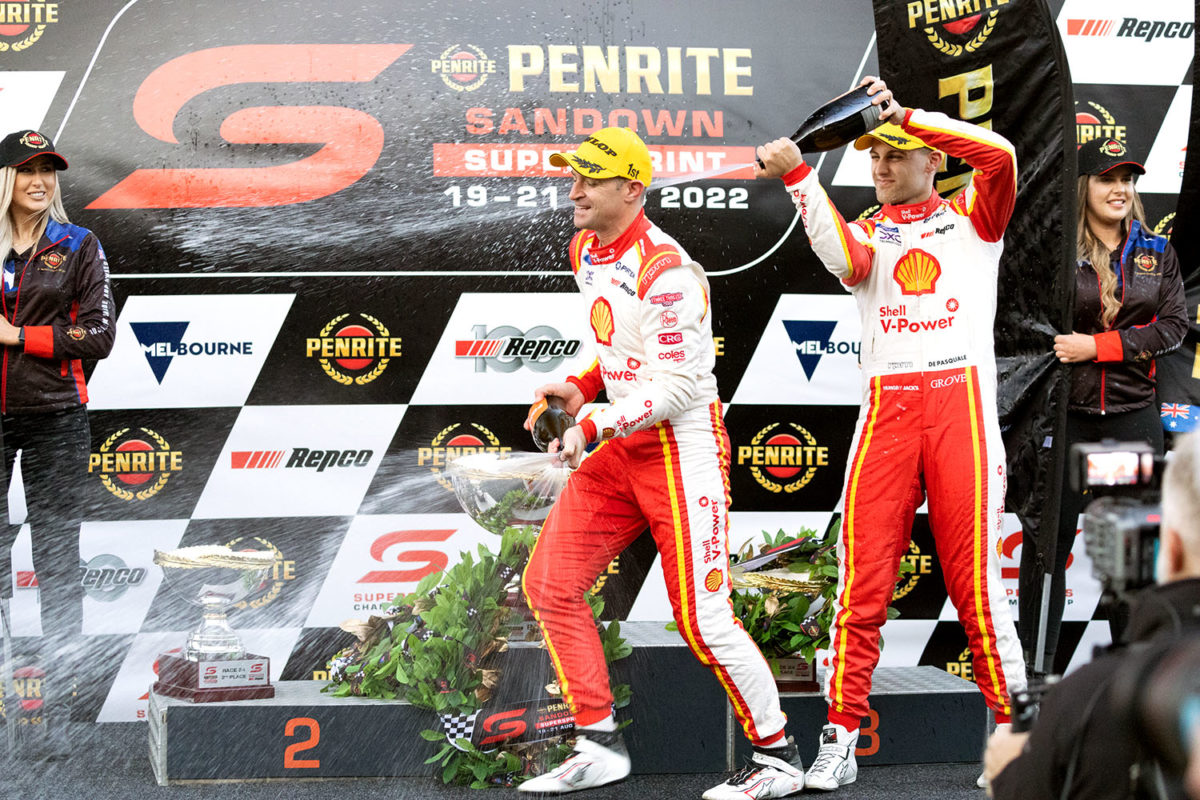 Will Davison and Anton De Pasquale