Designer Oli Booth embraces creativity and innovation to give a unique twist to his home, in which the landscape is an essential consideration in the design.

Although the home is spread over two levels, the burrowing of the ground floor into the sloping site creates a deceptively simple facade.

“We wanted it to feel embedded in the site. We’ve gone to quite a lot of effort to conceal the structure, to make the house feel low-lying, ”says Oli. “The concrete panels are a form of cloak, concealing what lies beyond.”

The moment you step inside the front door, the closed-off exterior gives way to floor-to-ceiling glazing and sweeping views across the city to the Waitākere Ranges.

Its pared-down interiors allow the house itself, as well as its verdant surroundings, to take center stage. “It’s a good spot to perch and watch the world go by,” says Oli of the home’s elevated communal area.

During the daytime, its design nuances and leafy tree-top vista can be fully appreciated, while at night, with its expanses of glass that run the full length of two sides, the house lights up like a rectangular lantern.

Despite being built in the backyard of a subdivided bungalow in the central Auckland suburb of Gray Lynn, surrounded by neighbors, it feels secluded and calm.

“While inner-city living has its multitude of benefits, there exists an undeniably compromising closeness between residences, where the feeling of separation is not always a given,” says Oli.

Privacy has been maximized by positioning the house at the rear of the plot of land and facing it away from the streetscape. This unconventional move – turning its back on the sunny aspect – presented a challenge when it came to finding ways to get the northern light into the structure.

READ: How Martina Blanchard Transformed Her Queenstown Home Into A Modern Alpine Retreat

“When I was exploring how light can be amplified, I came up with an idea to insert a 4.2m-long ‘slot’ in the apex of the roof. Together with the ceiling space flaring out, this encouraged the sunlight to be directed deeper into the living spaces, ”says Oli.

“Black glass mosaic tiles clad the interior of this form, which generates a playful, dappled light throughout the day. A glass doormat at the entrance brings borrowed light to the lower level. “

Oli and his wife, Libby Elmore, were hands-on when it came to the interior. The couple, who met at architectural school in Wellington, installed the salvaged tōtara interior linings themselves. The built-in shelving and furniture is another example of their handiwork.

Downstairs, the sleeping quarters are surrounded by native vegetation and feel completely removed from the upper level’s urban environment.

“A lot of people don’t realize there’s another layer down there,” says Oli. The main bedroom and 10-month-old Hugo’s bedroom are furnished simply.

“We wanted the bedrooms to feel generously sized. We achieved this by keeping the furniture limited to the bed itself and having built-in storage instead of drawers and wardrobes. “

The selection of flora was as important to the architectural experience as the structure itself.

“We wanted something soft and gentle. We engaged landscape designer Xanthe White to help formulate this space and create layers. She came up with a concept of large banks of foliage that provide buffers for privacy, ”he continues.

“It’s got that tension between the graphic lines of the concrete cladding and the flowing curves of the foliage.”

The landscaping also marks out a front courtyard, where a fire pit, coffee table and seating area provide a space for gathering. 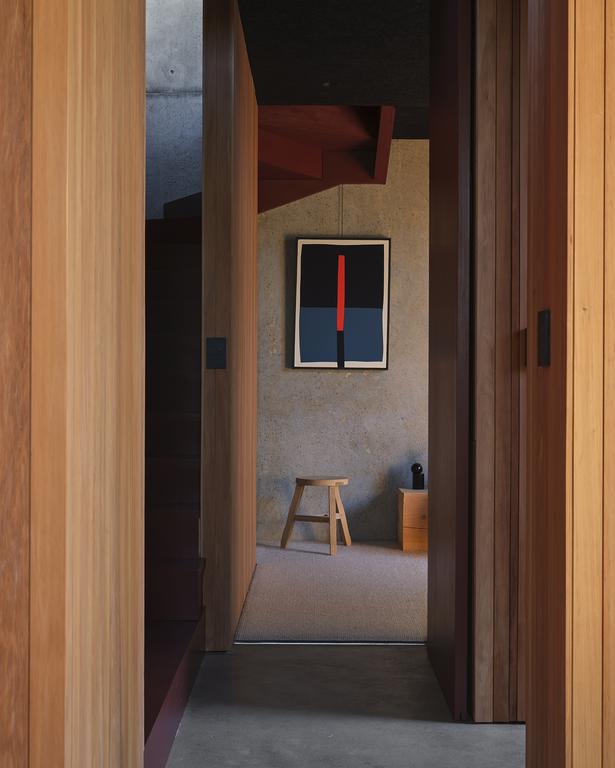 A view down the hallway with the striking red staircase to the left. Photo / Sam Hartnett

The house takes advantage of modern-day advances in the thermal qualities of materials, using lightweight pumice aggregate for the exterior walls instead of ordinary sand and gravel concrete.

“The Litecrete increased thermal performance, allowing the concrete to be exposed internally, instead of being covered with insulation,” says Oli.

Keen to experiment with new and innovative concepts, designing and building his own home gave him an opportunity to use the project as a laboratory for ideas. Some aspects, such as the fluted concrete exterior walls, involved extensive research and testing.

The idea for the design came to Oli during a summer holiday in Taupō. While getting a boat canopy repaired, he spied the large cardboard tubing for upholstery fabric. Oli could see how, side by side, the tubes could become the pattern for the undulating exterior walls.

“We had 165 of these custom-made, the whole family helped us seal them, then we delivered them to the precast concrete manufacturer.”

The intent was to create a monolithic facade that seemed robust at a distance, but delicate and intricate on approach.

The ridges between each flute allow for a natural erosion of the concrete and create an ever-changing shadow play across the facade of the home throughout the day. 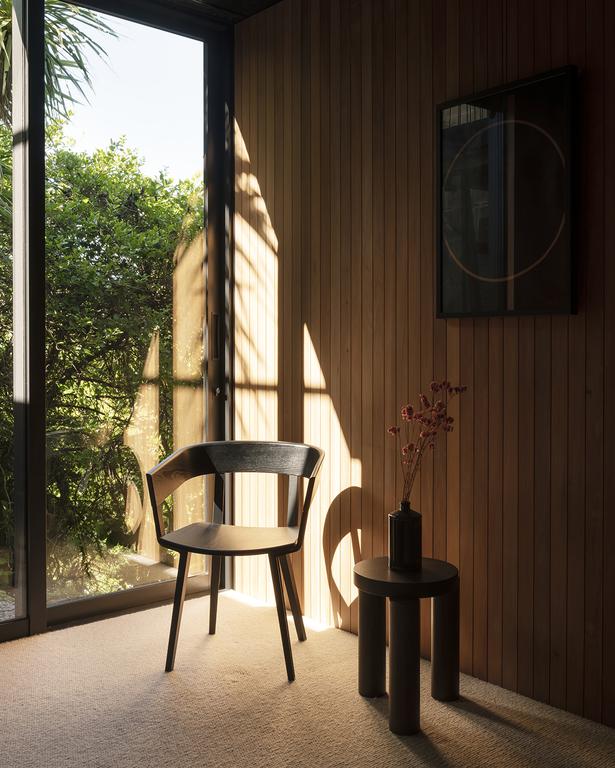 Strong color is introduced on the stairwell, but not in an overbearing way. A coat of scoria-toned paint elevates a standard pine staircase, transforming it into a striking architectural feature.

“With a bit of effort, you can take something that’s quite utilitarian and dress it up.”

Another design signature is the dramatic dark flooring and black-stained Strandboard ceiling in the upper level, putting the focus on the views by taking the eye outwards.

Every centimeter of the 85sq m home, situated on an equally modest site of 280sq m, demonstrates that a small footprint and high-quality design are not mutually exclusive.

“As intensity becomes more important in our urban environments, we tried with this house to show how small can still be beautiful and expansive and generous. You don’t need a large site to create these feelings, ”says Oli.

“It’s the perfect place to bring clients so they can get a feel for what we do. We’ve already had a number of people wanting something similar. “

The house, Lightly Weighted, is entered in the Best Awards. Oli Booth is a finalist in three spatial design categories: Emerging Designer, Residential Architecture and Color Award. The winners will be announced on October 7.

Blake Lively, Ryan Reynolds ‘always planned’ to have big family, may not ‘stop at 4’ kids

Look Inside A Brooklyn Home That Accentuates Its Beautiful Bones