Shamrock Lu was too strong at the finish of the TAB Venue Mode Handicap at Eagle Farm. Picture: Grant Peters-Trackside Photography

The formguide said 116 lengths last but that didn’t stop punters from weighing heavily into Shamrock Lu when he lined up in Saturday’s TAB Venue Mode Handicap (1000m) at Eagle Farm.

Shamrock Lu was officially last of 12 runners at his previous start in a 1000m race at Eagle Farm on July 30 however there were significant excuses – as you’d expect for a horse beaten 116 lengths.

“He was really fidgety in the gates the other day, he’s always been a little bit excited in the barriers but he had a new trick the other day, it was a day out to forget,” trainer Tony Gollan told Sky Channel after the race .

“He trialled well since then though and we came here thinking he’d run well.”

Jim Byrne takes out his second race of the day on Shamrock Lu. pic.twitter.com/h1RyaVuaFk

Stewards reported on Shamrock Lu’s previous start the gelding got its leg over the barrier partition as the start was affected and he took no competitive part in the race, despite being declared a runner.

Shamrock Lu was forced to trial following his Eagle Farm antics and after getting the job done he was on the radar for punters who launched in, backing the five-year-old from $ 8 into his starting price of $ 5.

The strong finishing effort of Shamrock Lu was the middle pin of a winning treble for Jim Byrne who owned the early part of the program winning on hot favorite Hellavadancer ($ 2) before book-ending his successive winners with Barade in the Grant Burge Dinner Handicap ( 2200m).

Barade made it successive wins for trainer Jack Bruce after joining stable after a run of outs in Victoria.

The gelding has had just four starts for Bruce delivering at a 50 per cent winning strike rate and the strong finishing performance after circling the field under Jim Byrne has the trainer thinking similar races beckon for the rejuvenated seven-year-old. 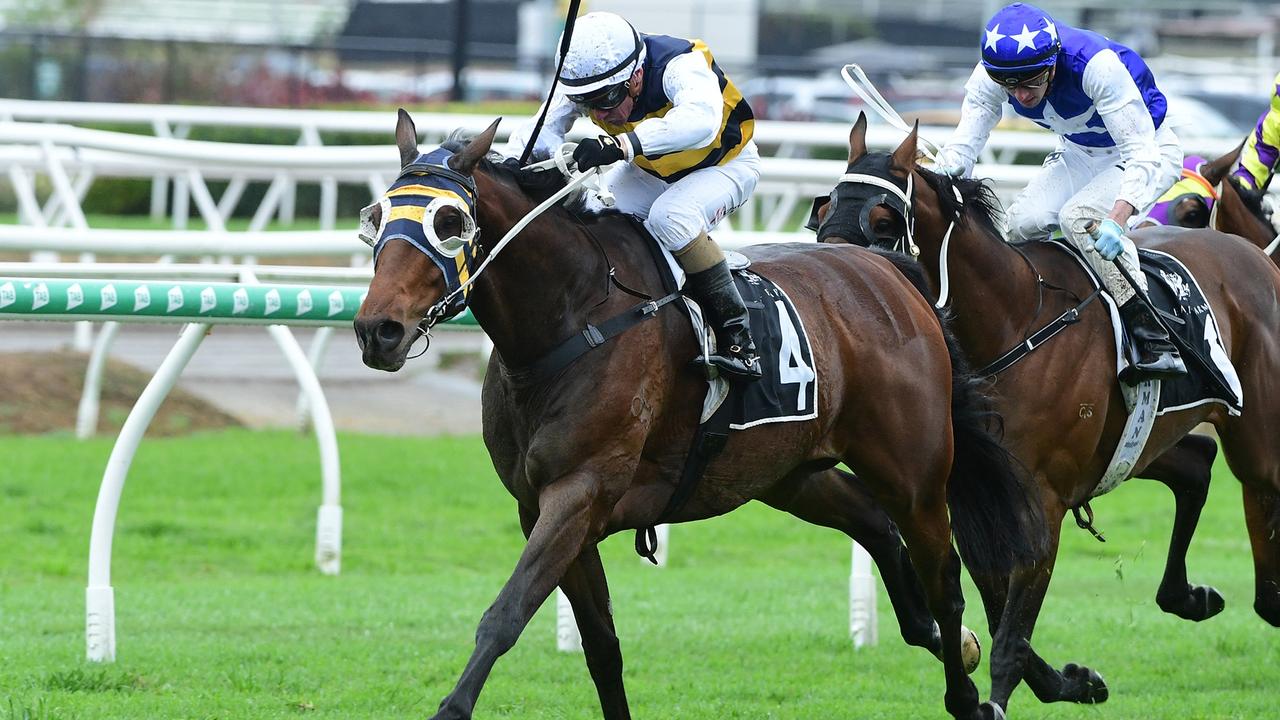 Barade makes it a hat-trick of winners for Jim Byrne in the Grant Burge Dinner Handicap at Eagle Farm. Picture: Grant Peters-Trackside Photography

Rosehill-based training partners Gerald Ryan and Sterling Alexiou made it a two-state double within the space of just 15 minutes when James Orman landed Deficit ($ 4.60) a tough winner of the Spring Carnival on Sale Now Handicap (1825m).

James Orman was able to lift the four-year-old Deficit over the line soon after Ryan and Alexiou greeted the in-form Conscript a winner at Rosehill.

Later in the day apprentice Angela Jones put behind a disappointing start to the program to land the Sky Racing Handicap on Tokoriki Lad ($ 8.50).

The boom apprentice had a full book of nine rides on the day with the hot favorite Ice In Vancouver looking the best of her chances however the Cody Morgan-trained galloper could finish only third behind Shamrock Lu as a $ 2 favorite.

Jones had to wait until the eighth race to land a winner and it was her 3kg claim which came to the fore in getting Tokoriki Lad over the line first.

“With Anges 3kg claim today he just got in beautifully at the weights,” Gollan said

“When he had the 58 (kg) on ​​his back at the start of the week I was pretty nervous, but with that claim and 55 kilos he got a lovely run off a low draw. He took the length of the straight to win the race but to me it was never really in doubt. ”

What the jockeys said after Anamoe and James McDonald’s win