Neptune is the eighth and last planet in our solar system, and as such, it is the planet furthest from the sun and Earth. As a result of the planet’s location, observing it before humanity could leave orbit can be a challenge even to the best astronomers.

To remedy this, NASA launched a space probe that will give astronomers the opportunity to look at Neptune and its moons from up close.

This is the mission of Voyager 2, and the result of its mission is one that will be remembered by astronomers then and now.

(Photo: NASA / JPL)
One of Voyager 2’s pictures of Neptune’s largest moon, Triton. Notice the “fretted terrain” on it.

During Voyager 2’s fly-by of Neptune, NASA scientists made several observations on the ice giant alongside fascinating discoveries, such as five new moons and four rings.

It was also able to find Triton, Neptune’s largest moon. Based on the photographs the spacecraft took of the moon, it had a complex pattern of irregular topography that looks like the “fretted terrain” on parts of Venus and Mars., Per NASA’s Solar System Exploration.

Scientists also found that Triton has been renewed relatively recently (within the past billion years or less) as there were no large impact craters on its surface.

The moon also has long, straight lines which could be a sign of the plate tectonics happening beneath the surface of Triton.

A “restored” version of Voyager 2’s footage of its fly-by showed that atmospheric plumes are present on Triton, making it one of the known active celestial bodies in the outer solar system, which includes Jupiter’s Io and Saturn’s Enceladus.

Unfortunately, only one of the moon’s hemispheres is visible in Voyager 2’s photos due to the moon’s slow rotation.

Despite this setback, NASA scientists were astounded to see Triton for the first time, with it serving as a prequel to the discoveries made by the New Horizons spacecraft. 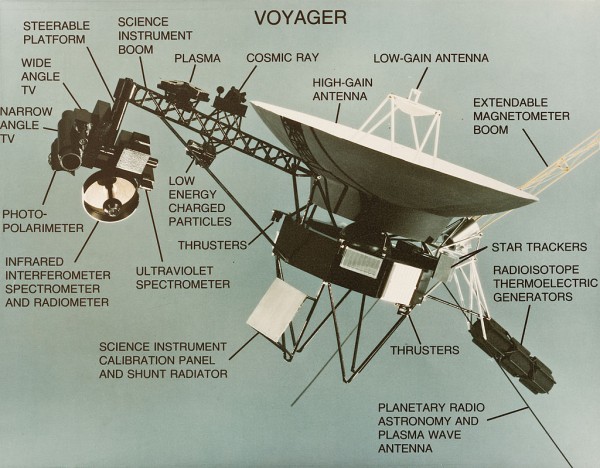 (Photo: NASA / Hulton Archive / Getty Images)
A picture of the Voyager 2 sapcecraft with its parts named and shown.

Voyager 2 is the sister spacecraft of Voyager 1, which is the first spacecraft to travel beyond the solar system, per Space.com. While Voyager 1’s mission is to get close-up pictures of Jupiter and Saturn by doing fly-bys, NASA wants Voyager 2 to go even further, doing fly-bys of not Jupiter, Saturn, Uranus, and Neptune, per NASA.

It is equipped with an array of instruments similar to its sister spacecraft, with Voyager 2 having an Imaging Science System, Ultraviolet Spectrometer, Infrared Interferometer, and Planetary Radio Astronomy Experiment.

It also has a Plasma Waves Experiment, Cosmic Ray Telescope, and Radio Science System to assist the spacecraft in its mission.

During its journey to the edge of the solar system, it was able to come across Jupiter on July 9, 1979.

Although NASA scientists have gotten a close-up of the planet with Voyager 1, they still checked out the Gas Giant with the spacecraft, discovering a new moon that orbits the planet – Carme, Jupiter’s 14th moon.

Voyager 2 was also able to pass by Saturn, though NASA didn’t find anything new with the planet at that time. However, it did become the third spacecraft to visit Saturn by doing so, per Space.com.

Meanwhile, Voyager 2’s fly-by of Uranus resulted in a discovery – ten new moons and two rings were discovered thanks to its fly-by on Jan. 24, 1986.

However, its close-up on Neptune was what gained NASA’s attention the most.

Related Article: #SpaceSnap Believe It or Not, There is Such a Thing as a Hockey Stick Galaxy

This Curvy Quantum Physics Discovery Could Revolutionize Our Understanding of Reality